ALL THE PRETTY LIES- Cover and blurb reveal

It's been a long time since I've been this excited over a story, since characters ran away with my life and refused to bring it back for weeks.  I'm still suffering from the worst book hangover I've ever had and I've written a book since I finished this one. But that doesn't seem to matter. I can't get Hemi and Sloane out of my head.   And I'm dying to introduce them to you!!  OMG

When I saw this photo, I knew this had to be the cover.  It so perfectly captures not only a specific scene in the book, but the delicate beauty and sometimes heavy heart of Sloane.  It spoke to me so loudly, and I hope it speaks to you, too.  So, without further ado, here is the cover and blurb (and a teeny tiny teaser) for ALL THE PRETTY LIES, coming November 12th: 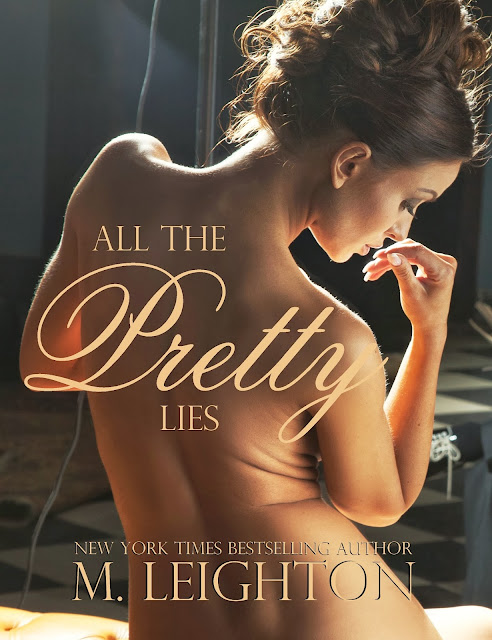 All the Pretty Lies
“Live, no regrets”

Her…
Sloane Locke has led a sheltered life.  However, with a history like hers, she can understand why her brothers and her father want so much to protect her.  She has gone along with it for twenty long years, but those days are over.  For the girl who never makes promises, Sloane has made a pact with herself that things will change on her twenty-first birthday.  So when the clock strikes midnight, Sloane strikes out to spread her wings and break a few rules.

Him…
In addition to inking skin, Hemi Spencer possesses many talents. Controlling himself has never been one of them.  It’s never had to be.  He’s lived a life of indulgence for as long as he can remember.  Right up until tragedy struck.  Now, he’s nothing but controlled. He’s a man on a mission, one who will let nothing and no one stand in his way.

Them…
Nothing in their lives could’ve prepared Sloane and Hemi for what they’d find in each other—distraction and obsession, love and possession.  But the one thing they can’t find is a future.  Neither one has been totally honest.  And they’ll soon learn that the devil is in the details.  In the details and in the lies.

How far will two people go to live in the now when the now is all they’ve got?

Hemi stands to throw something into the garbage.  When he turns back toward me, our eyes collide.  That’s when the impulse hits me.  It slams into me like a gust of wind going ninety miles an hour. It steals my breath and makes my heart beat so hard that I can hear it in my ears.  And for once in my life, I put thought aside. I don’t overthink it. In fact, I don’t think about it at all.  Before I can change my mind, I slide off the table and step toward him.  He doesn’t move, doesn’t back up, just stands tall and perfectly still.  Watching me.  I wonder if he knows what I’m thinking, how I’m feeling. What I’m about to do.  And I wonder if he’ll stop me.

But I don’t overthink that either. If I do, I’ll chicken out.  And I can’t afford to chicken out on life anymore.
I take another step toward him, building up the nerve to just do it, just kiss him.  But Hemi surprises me when he takes the step that will bring us near enough to touch.

He’s so close, my chest almost brushes his every time I inhale. I sway toward him the tiniest bit, craving the contact.  With him.  A perfect stranger.

“Sloane,” he whispers, the sound of my name on his lips bringing chills to my arms again.  He reaches out to push my hair back over my shoulder.  His fingertips linger on the skin of my neck before they fall away.

“Hemi,” I sigh, melting into the heat of his eyes.  I knew there was something between us. Well, I’d hoped. Hoped I wasn’t imagining it. But now I know I wasn’t.  It’s there, staring out at me from behind his hooded midnight eyes. Blatant and unabashed, he wants me.  And I want him, too.

“You need to walk out that door and never come back.”

My heart stops.  Of all the things I thought he might say, this came out of nowhere.  “What?” I ask in a small, uncertain voice.

I scramble to recover.  “But…but what about the rest of my tattoo?”

“I’m not talking about your tattoo and you know it.”

“Then what are you talking about?” I inquire, playing dumb to save what’s left of my crumbling pride.

“There will be in about thirty seconds if you don’t get the hell out of here.”

“What if I’m not that innocent?”

His lips quirk in a wry grin.  “Oh, you’re exactly that innocent.  I can practically smell it on you. Sweet, pure, untouched.  And, if I’m being honest, I’d like nothing better than to taste that on the tip of my tongue.”

“Then what’s stopping you?”

I watch him wrestle with…something.  “I don’t have the time or the inclination to get involved in ruining someone else’s life.”

“What makes you think you’d ruin my life?”

“But nothing.  For tonight, I’ll be the good guy you need me to be.  Whether you know you need it or not. I’m asking you to leave, Sloane.  But I promise you—promise you—that if you so much as darken my doorway again, I won’t let you walk back out again.”