Before We Fall by Courtney Cole

Okay, so for those of you who don't know, I'll tell you two things.  One, I have the great honor of being Courtney Cole's crit partner so I get to read all her books early.  Don't hate. hehe  Two, this book is probably one of my favorites of hers. It's raw and edgy, real and gritty.  And awesome!  Very, very awesome.  I won't spoil anything for you, I'll just say that Dom is one of my fave broken bad boys to date, and, in my opinion, gives Pax a run for his money.  And the good news is that it releases today!  Woot!  You can get it on Amazon or Barnes and Noble , as well as several other sites I'm sure.  Let me know what you think.  We can gush about damaged Dom together.  LOL  Check out this cover and blurb. 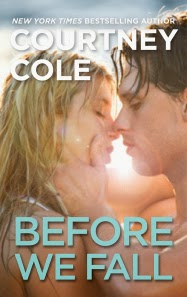 One dark moment was all it took to turn twenty-four-year-old Dominic Kinkaide's world black. On the night of his high school graduation, a single incident changed him forever, and he became a hardened man-famous in the eyes of the world, but tortured inside. Now all he cares about is losing himself in the roles that he plays.

At twenty-three years old, Jacey Vincent doesn't realize how much her father's indifference has affected her. She is proof that sometimes it isn't one specific moment that wrecks a person, but an absence of moments. She tries to find acceptance in the arms of men to fill the void-a plan that has worked just fine for her, until she meets Dominic.

When jaded Dominic and strong-willed Jacey are thrown together, the combination of his secrets and her issues turns their attraction into the perfect storm. It could change their lives for good-if it doesn't tear them both apart . . .

Excerpt ONE for Be the First to Fall week:

“Are you feeling warm yet?”
I watch his lips as he speaks the words, husky and low.   His lips are full, yet manly and suddenly I ache to lean over and press mine to his, to touch them in any way that I can.
But I don’t.
Because I’m not a girl who gets used.  Not anymore.
“No, not at all.”
But Dominic takes that as a challenge.  He’s not used to hearing the word no and he’s not about to start now.  I see that in his dark eyes a scant moment before he dips his head and consumes my mouth.
I say consume, instead of kiss, because that’s what he does.
He consumes me.
His lips are fiery and hot and he kisses me with a fierceness that touches a secret part of me; moist, hot, firm, sexy.  I want to inhale him, to suck him down.  I vaguely feel his hands on my back, his warmth emanating through my clothes, his hardness pushing into my softness.
I’m breathless when he pulls away.
“What about now?”
For the life of me, I’m afraid to answer that.  Instead, I pull away, just a bit, just enough that there is some space between us, but I can still absorb his warmth.   As my teeth chatter, both from the cold and from the sudden absence of his lips, I answer.
“I’m good.”
He laughs, a husky, low, naughty sound.
“Oh, I’m sure of that.”
And just like that, I’m drawn back in… in toward his sexy smile, his arrogant gaze and his knowing smirk.  He’s bad for me.  Very bad for me.   I’ve got to remember that.
He will decimate you, I tell myself.


But my problem is, every time I look into his dark eyes and see the mysterious things that lurk there, I forget that.   I forget everything that is supposed to matter.

Courtney Cole is a New York Times and USA Today Bestselling novelist who lives near Lake Michigan.  She spends her days complaining about the cold and staring dreamily out her office window. To learn more about her, visit www.courtneycolewrites or www.courtneycoleauthor.com.
Posted by Unknown at 7:00 AM