All Things Pretty- SIG IS LIVE! and some other things:)

The ONLY site that's giving me trouble is Amazon:(  I'm sorry to say that as of right now, it's in limbo. I'm hoping that the issue will be resolved around 12pm EST as that is when the KDP people that I know come in to work (they are on west coast time).  Please keep your fingers crossed!  I'll update the links below as soon as it's live.

**Update**  I spoke with KDP and they are pushing the file through, but it could still take a couple of hours. They'll be monitoring it, as will I, and I'll post more info (or hopefully just live links!!!) the second it's ready.

Now, I also have a special announcement to make.  As you begin to read ALL THINGS PRETTY, you'll notice a foreword in the very beginning.  Let me explain a little more about that.

I'm so blessed to be able to work with my amazing traditional publisher, Berkley.  They are a division of Penguin Random House and they were very gracious in their contracts with me in that I am allowed to self-publish indie books.  Their only requirement is that the books be NO MORE THAN 65,000 words.  That's not normally a problem, but sometimes a story needs more.  More time, more detail, more explanation. Just more.  And Sig's story is like that. I could've shortened it, rushed it to fit into one single book, but I felt that I would be cheating Sig and Tommi of their best story if I did that. So I didn't.  Instead, I wrote it as it needed to be written.  But that meant it was too long.

After much thought, I decided to do this.  I'm publishing ALL THINGS PRETTY today with a cliffhanger.  Now before you hate me, let me explain.  I had to find a good place to stop this book because I'm giving you the remainder of it on October 14th for FREE.  I feel it's the right thing to do, yet it keeps me out of trouble with my publisher.  Here's how I'm going to do it.

My newsletter is set up with an automation capability so that when you sign up for my newsletter, it will ask you what file type you prefer and then on October 14th, it will automatically send the remainder of ALL THINGS PRETTY to your reading device.  How cool is that?  Problem solved.  YAY!

I feel like this accomplished the right goal for all of us. I get to tell the story the way it needs to be told, y'all get all the detail that it seems like you want, and my publisher stays happy, too.  Win-win.  Well, win-win-win.  :)

So, when you pick up your copy today, expect the cliffy but know that the rest is coming. I'm editing it now and it will be ready on time.  As for those who are waiting for the paperback, I'm setting it up so that parts one and two are combined in the print edition, which isn't unusual, and there are clearly two very distinct parts to the book, neither exceeding 65k words (and both published separately digitally).  *happy sigh*  Those will be ready by the time part two is sent to you on October 14.

Now that you know why I did what I did, I hope you'll go into Sig's book with all the love and anticipation that I have for him and his story.  I fell for him.  I fell hard.  I can't wait to hear what you think of him!  I had some laughs, shed some tears, swooned many, many times.  This is one of my own books that I'll be re-reading over and over again.  I hope you do the same.

Here's a little sneak peak into the second part.


“You can’t be falling in love with me.  Love is pretty, not ugly.  And I’m ugly,” I tell him brokenly, the fight drained out of me, left lying on the floor with my puddle of tears.

“You’re wrong.  Sometimes love is ugly. And not all things pretty are loveable.  But you…you’re not just pretty. You’re beautiful. The most beautiful thing I’ve ever seen. Inside and out.  You did all this for your brother.  Since you were nothing more than a kid yourself, you’ve fought for him with whatever weapons you had.  That makes you worthy of the best kind of love. The kind that’s unconditional.  The kind that never leaves you, no matter how hard you push back. The kind that finds a way, against all odds.  You deserve that.  Actually, you deserve more than that.  You deserve more than I can give you, better than me.  But maybe one day, after all this is over, I can be worth your love.”

All Things Pretty, chapter one excerpt and playlist

I swear, it feels like Tuesday will NEVER come!  I can't remember the last time I was THIS excited over a book.  I always knew I'd love Sig when I got a chance to tell his story. I just didn't know HOW much I'd love him:)

I wanted to share the first chapter and the playlist with you.  I'm trying to pick excerpts, but it's so hard when I love something on almost every single page.  LOL  #WriterProblems  So, without further ado...available September 30th...

Good grief! Am I really the last author to do this?  THE very last?  No one else left?  Show of hands.

Well, this is not unusual for me.  I love my job so, so much that I write sometimes to the exclusion of all else, like keeping up with the latest platforms and sites:(  For that, I truly apologize.  But never fear!  I'm finally on board and I'm uploading books after I finish writing each day.  I should have my whole catalog up in a few days.  Thank you so, so much for your patience and thank you to Google for giving us authors another way to reach you amazing readers!  YAY!

Here's the link to my page on Google Play.  Ain't it purrrdy?  :D

Good morning!  I'm still riding my Sig high from yesterday.  *dreamy sigh*  I'm so happy to see him out in the world, getting so much love.  I'm like a proud mama, sending her baby off to school. LOL

Anywho, today I'm here about some goodies.  The reason?  Well, with social media sites restricting the number of people who see posts, I feel like it's important to be able to interact with you in a more reliable way.  My answer?  The newsletter.  My plan is to send out a letter once a month with an update on what's ahead, some exclusive teasers and (of course, you know me) a giveaway.  I'll also send a notification as a new release nears, one that includes incentives and particulars to my latest book.

To kick it all off, I wanted to give a special som'n som'n to you lovely newsletter signer uppers.  Because I appreciate you very much.  If you haven't signed up for it and would like to, be sure to do so here.  Tomorrow, I'll be sending out an email with a couple of things unique to the newsletter, including a chance to win some pretty cool things.  (Hint: Some of it has to do with Sig's ARC)  Whoop!

Okay, so to recap:

Have a super fabulous Thursday!  See ya out there!
Posted by Unknown at 9:56 AM

ALL THINGS PRETTY cover reveal and a little som'n extra

Okay, so after eating a shocking amount of what I like to call "writing food" --  a nasty-yet-awesome combo which consists today of beef jerky, Lay's potato chips, Mountain Dew and a few chicken nuggets  --  I thought I'd show y'all Sig's pretty new face. 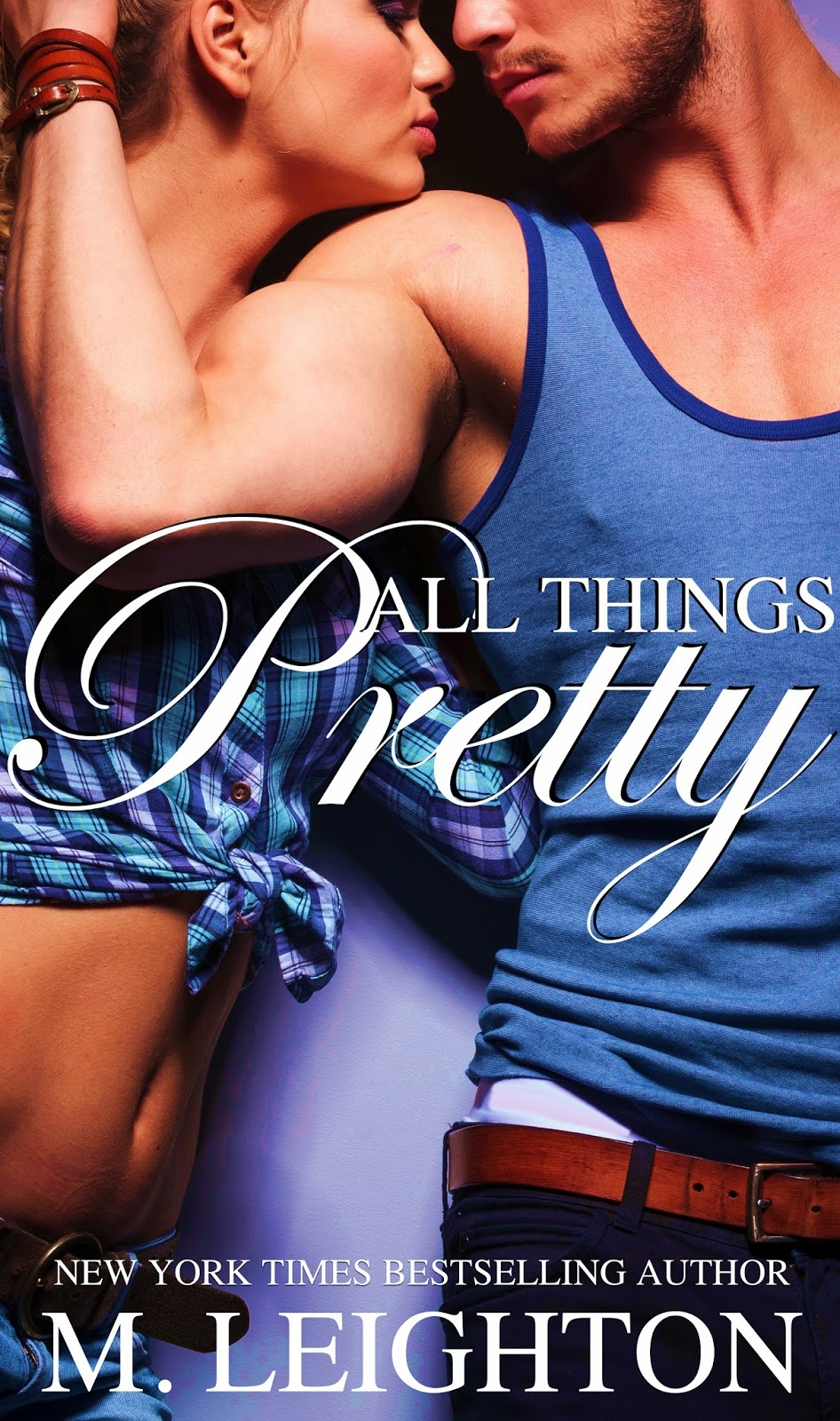 I've loved Sig from the moment I met him and now?  So. Much. More.  *fans face* Here's a little more about his story:

Pretending to be something they’re not, afraid to trust anyone completely, destined to tear each other apart– this is the story of unlikely love and unbearable consequences.

Sig Locke is a cop.  He was raised by a cop and all his brothers are cops. He bleeds blue, believes in right and wrong, and sees in black and white, never in shades of gray.

But that was before he met Tommi.

Tommi, with her long legs and bright green eyes, she captured Sig’s interest from the moment he saw her. Even after he discovered who she was–the girlfriend of a drug dealer, the beauty behind a criminal–he still found her utterly irresistible.  What Sig doesn’t know, however, is that she has a secret even a cop can’t uncover.

Tommi Lawrence hasn’t had an easy life, and it only got more complicated the day she met Sig.  She learned long ago that she can’t trust anyone.  Her gut tells her that Sig is no exception, her heart tells her that he is.  But that was before she found out his real identity.

Can love be forged in a fire of lies? Or will the truth destroy them both?

Stay tuned to my website for excerpts when I post them.  Now, I'm back to the cave.  Happy hump day everybody!